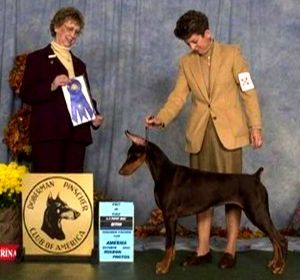 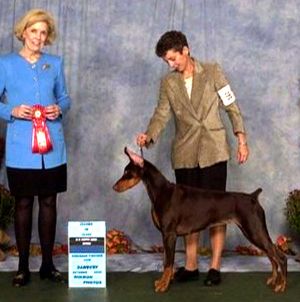 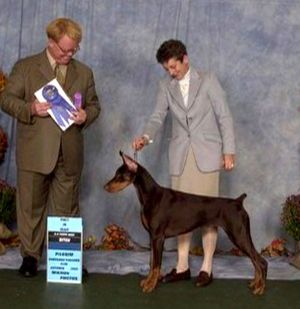 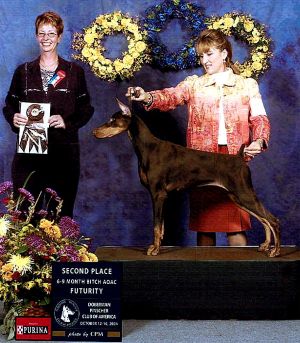 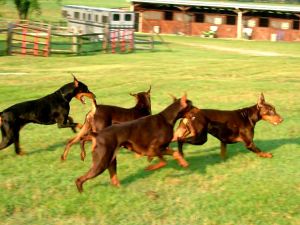 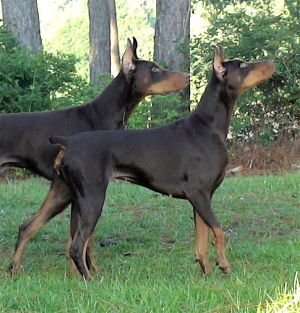 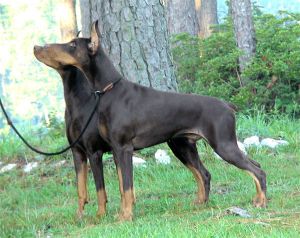 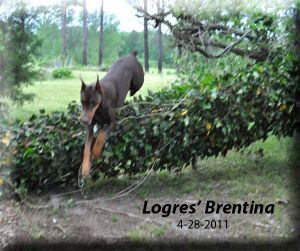 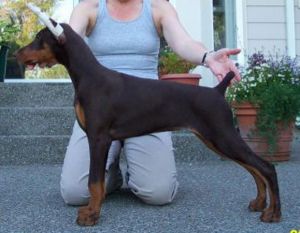 Here is the pedigree of Cambria’s Irish Rose who in 2004 was bred to Kafka, a.k.a. BIS BISS Ch. Brunswig’s Cryptonite, producing seven puppies for Logres. This litter was our foundation.

Though we did our first breeding back in 1986 (a Great Dane litter – which produced two BISS Champions) and another breeding in 1991 (a Giant Schnauzer litter, which produced four champions, who each finished with Breed wins from the Puppy Classes), our first Doberman litter was in 2004 – when we bred Cambria’s Irish Rose (by Ch. Cambria’s Cavalleria out of Ch. Orion’s Rasberry Beret) to BIS BISS Ch. Brunswig’s Cryptonite. Here is a Dobequest link to this pedigree.  http://dobequest.org/pedigree.php?=1&DOGID=26592

This breeding, which produced Titan, Brentina, Tungsten and Brentano was the foundation of Logres Dobermans. We include Brentano in the group, though he was never bred, because he did as much as any Doberman to inspire us to produce quality in both conformation and temperament.

The Best of the Past – Going Forward Into The Future

The Great Champion Multi BIS, BISS Ch. Brunswig’s Cryptonite died over a decade ago. In 2011 there are relatively few of his direct offspring available for breeding. Still, merely having Kafka in a pedigree does not guarantee quality. We all know that there can be hundreds of dogs sired by any “top sire” in a breed. Often the dam line (or the dam’s dam-line) is lacking. The faults of a mediocre dam line will pop up in the puppies and for generations to come. Wise breeders recognize that an important indication of any dog’s value – as a breeding animal – is the strength of dog’s pedigree, most especially, the strength of the dam line. Many dogs can boast a great sire or dam, few can claim both. Fewer still can claim littermates of superb quality. Logres’ Brentina, Ch. Logres’ Titanium and their descendents can claim it all. They are superb dogs – with an extraordinary sire and dam line, from an extraordinary litter. They were bred to be prepotent for the very best qualities of the breed, and are therefore of tremendous value to serious breeders and exhibitors.

Logres Farm and the Doberman Breed owe a huge debt of gratitude to Robert and Phyllis Farrier – the breeders of Ch. Brunswig’s Cryptonite.

Logres is pleased to present to the Doberman fancy our line-bred litter sired by THE GREATEST DOBERMAN OF ALL TIME Multiple BIS CH. Brunswig’s Cryptonite. -This breeding produced:

Logres’ Morgan Le Fay (red bitch) sold to a home that did not follow through on showing, or their promise for puppies back or any other promise they ever made to us. *

Logres’ Charisma of Juris (red bitch) DNA vWD Carrier – sold to people who did not follow through on showing, or their promise for puppies back, or any other promise they ever made to us. * And worse, sold her without our knowledge or consent  (reportedly for $1,000) – to a home whom they then encourgaged to spay her. This poor bitch later died from complications of an unnecessary surgery.*

*The sad realities of these two bitches are part of the reason for adding a monetary penalty to the clause of our contract that mandates that our dogs must come back to us if the owner decides to part with them FOR ANY REASON. It is now written into our contracts that there is a $15,000.00 (fifteen thousand dollar) fine for violating this clause of our contract. And we require close contact with owners with respect to major veterinary procedures, to avoid subjecting dogs to unnecessary veterinary procedures.