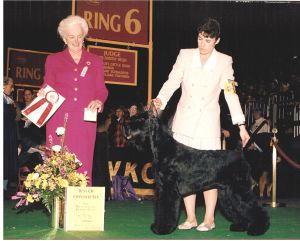 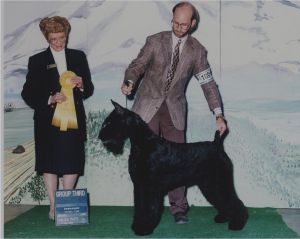 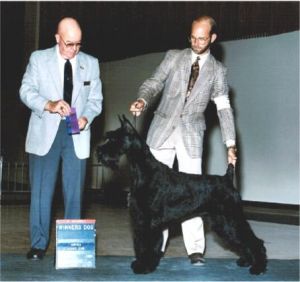 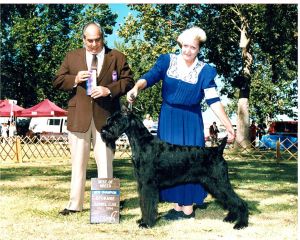 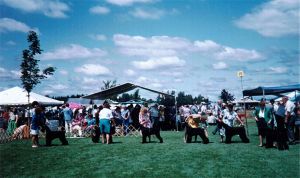 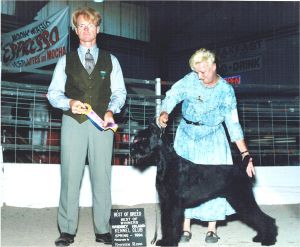 While at Skansen in 1992 I saw a young dog – Lucas. As I recall, Lucas was less than a year old, he’d been imported from Spain, he was not related to any Skansen dog; he had not been shown and Sylvia had not used as a stud dog yet. (She was actually pushing another dog, Sieger… in fact she was pushing several other dogs. Frankly, Sylvia was pushing just about everyone but Lucas.

I knew Lucas’ pedigree and could easily recognize what Lucas had to offer. No one had to hold my hand to point him out. I did not need to see him stacked by a BNH (Sylvia stacked him for me). I did not need to see a win photo, and he did not need even a single AKC point to attract my attention. I was the first breeder to use Lucas. I bred to him before Sylvia, I bred to him before he ever stepped a paw in the AKC breed ring. In fact, my bitch – Alaris’ Summer Classic – was home safely in whelp to Lucas before he was ever shown.

Lucas’ first time in the ring was in the Open class at the 1993 Giant Schnauzer Club of America National Specialty in Brush Prairie, Washington. Lucas won the class, won the points, and went on to win the Breed… at the Giant Schnauzer Club of America 1993 National… from the classes … under Klaus Droop. Lucas, a.k.a. Ch. Lucas de Campos de Oros, finished in the next two shows (over the next two days). He went on to be one of the top sires in the History of the Breed. I had his first litter, conceived before he had even a single point. I had four champions in my litter… all finished from the puppy classes… all took the breed from the puppy classes.