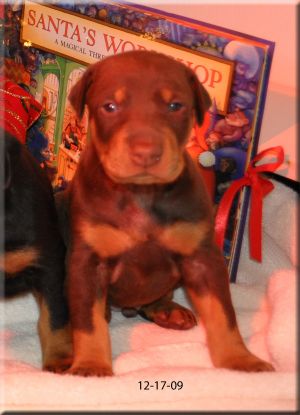 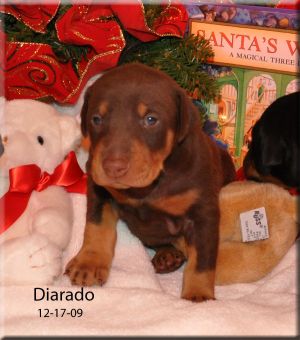 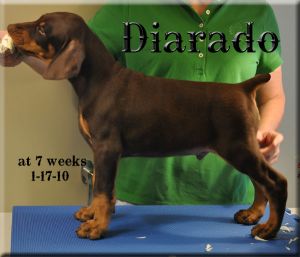 We are very selective about  breeding, to the point of being too cautious, and  Ch. Logres’ Diarado is an excellent example of this.  His sire, our Ch. Logres Warkant has only been bred once, producing four puppies, of whom two were shown; Logres’ Hotline and Ch. Logres’ Diarado.  Hotline was shown by Kelly Marquis. She won her class many times, including the 9-12 Black Bitch class at the 2010 DPCA National. But Kelly never actually put a point on Hotline, in part because Kelly never stayed on Hotline in winners (it was never Hotline’s turn).  Hotline is the dam of our litter by Logres’ Argentinus.

Diarado was also shown by Kelly. He too won his class at the 2010 DPCA Regional and was finished by 11 months of age.  Though we love many things about Diarado, we ultimately decided he was not what we wanted going forward so he was placed in a wonderful companion home.  He is now the beloved companion of a veterinarian in Virginia and spends his days on farm visits with his owner Gabrielle.